This is it! I’m posting one last time to ask for your help in choosing a prompt word for tomorrow’s Just Jot It January.

The rules for getting your prompt in are:

P.S. If your word is the first and is chosen, you’ll also have your blog linked to my daily post tomorrow. It’s well worth the effort!

There are certain things we humans naturally feel a oneness with. Being joined by the tradition of marriage; being a couple rather than an individual and having your name synonymous with someone else’s of your choosing creates a sense of completeness. The birth of a child between a couple who love one another is a bond that cannot be broken. For that matter, our families as well as our friends, nature, or even a good book can cause a feeling of oneness. But etched in my mind was one bond I can recall with great clarity. It was with my horse.

His name was Shadow and he was a mutt – part quarter horse, part thoroughbred; we were never really sure. I bought him from the lady who owned the farm where I guided trails but I eventually moved him closer to where I lived. Close by was a conservation area, the Vivian Forest, consisting partly of natural forest and partly planted rotating forestation, which spans almost 5,600 acres. I could ride for eight hours without seeing the same trail twice. Shadow and I knew the place very well.

There were a few rides, just me and my horse, that I’ll never forget. Once, riding along a well-worn trail, we came too close to an owl’s nest. She wasn’t pleased: she flew at us, soaring over my head three or four times as I ducked down as close as I could to Shadow’s mane and we galloped the hell out of there. Another time we were walking, on our way home, when Shadow came to a dead halt, head up, ears pricked. Rather than urge him on, I sat still on his back and looked in the same direction he was staring; a fully antlered buck, almost the size of my horse walked out of the forest on to the trail, stopped, stared at us, and crossed the trail, disappearing back into the woods.

But there was one ride that truly made me feel that oneness. It was early summer and I’d just finished an overnight shift at the 24 hour gas station I was working at at the time. Rather than head home to bed, I decided to go out on Shadow for a while. We went a long way that morning and on the way home I couldn’t keep my eyes open anymore. So I closed them and fell almost all the way to sleep in the shade of the forest, while Shadow took me home. What an incredible feeling of oneness it was.

The “Oneness” prompt is brought to you by Carol at WritersDream9. Pop on over and say hi! 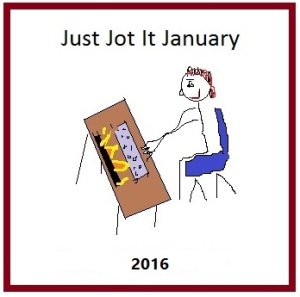 To find the rules for Just Jot It January, click here and join in today. It’s never too late! And don’t forget to ping back your January 26th post here!