July 19th, 2013: My trip to Kingston was interesting indeed. With so many strange goings-on, I can’t help but wonder if I somehow ended up in my own novel. Without giving too much away, this is how it went:

The Hochelaga Inn was much as I expected. Built in 1879, it has been well-preserved not only in its physical appearance, but for its ambiance as well.

Peace and rest, however, although perhaps wished upon me by the Management and Staff, were not what the Inn itself had in store.

Having not a great deal of money, but wishing to take an extended weekend away, I booked the cheapest room in the Inn for the first two nights, (Saturday and Sunday) and the Tower room–the most expensive–for one night (Monday).

My first night didn’t include much sleep. Three times during the course of my slumber, I was awoken by the fire alarm, which was situated on the ceiling beside a spinning fan, for no apparent reason. When I asked about it at reception the next morning, because I thought there might have been a problem in another room, they said they had no idea what had happened. Unfortunately, I was told, the Tower room was booked for that night, otherwise they’d have moved me in there early. So I gave back my room key with an assurance that I would be moved to another room for my second night at no extra cost.

The conversation between the two ladies I had spoken to at the desk, overheard after I walked away, went something like this:

“Wooooo …” in a ghostly voice.

Later, when I arrived back at the Inn after spending a lovely day wandering around Kingston and getting burned to a potato chip by the sun, I was handed the key for the Tower room.

“We were able to move you up there a day early,” the lady said without further explanation.

The house wants me in the Tower, I thought.

I happily I went up to my room to take a few pictures before dark.

The lower part of the tower.

The view from the top

It was a long day and I didn’t feel like doing much, so I sat on the bed with my feet up and watched a movie on my laptop. I didn’t bother to turn on the lights, and by half-way through the movie (The Brave, with and by Johnny Depp if you’re wondering) it was dark. That was when my friend decided to come along. I didn’t take a picture of my friend, and in fact I’m quite proud of myself for not throwing my laptop across the room. Let’s just say he had eight legs and appeared to be the size of Jaws as he scurried across my screen.

My second night didn’t include much sleep either. I think my camera catches quite well the state my eyes were in by Monday morning: 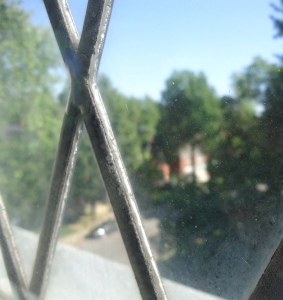 A lovely blurred view from the lower tower window

I spent most of Monday driving around town. I went to the VIA Rail station, where my two main characters disembark after having met on the train, and I was able to record many small details such as the waiting room seat colours and the fact that there are sliding glass doors on both the back and front. I drove from there to where my story is set–where I imagine the house to be–to see how long the journey would take, as well as noting different things they might see on the way.

When I got back ‘home,’ the first thing I did was look for the spider. There was no sign of him whatsoever.

Yay! I thought. I’m going to get a good night’s sleep!

So I was downstairs talking to the lady at reception again after having spent a few minutes poring over a framed blueprint of the Inn, from 1920 when they were hooking up the electricity. The house had changed quite a bit, and we were having a lovely discussion about where the rooms were and the staircase that wasn’t there any more etc.. when she mentioned the ghost.

“There’s a ghost here?” I asked, my eyes like saucers, I’m sure.

“Yeah,” she said. “We’re part of The Haunted Walk of Kingston. You should go on it.”

From there I went to a bar. Okay, I went to a restaurant. But must say I indulged just a little. As it turned out, I was sitting on the patio waiting for my bill when a strange looking man wearing a black cape and holding a lantern (click on the Haunted Walk link above for a visual) exited the building that housed the restaurant. He stopped and stood not six feet away, waiting. It took me a few seconds to realize he was the tour guide for The Haunted Walk. (Like I said, I’d had a few.) So I thought it might be fun to talk to him.

“Excuse me, are you guiding the Haunted Walk tonight?” (All right, all right. Maybe I was sloshed.)

“I’m staying at one of the places on your tour: The Hochelaga.”

“Yes, that is one of the places we visit,” he said politely.

“Would you like me to put a sheet over my head and stand at the window in the Tower?”

I thought he was going to blow a gasket.

“YES!” he exclaimed, all but jumping up and down in excitement. “The people would love that!”

So guess what I did? 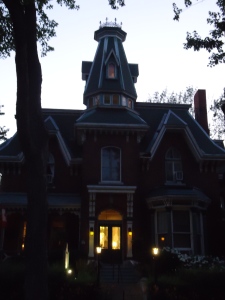 At dusk. I turned on the lights in the Tower so they would glow.

After the people left (they actually pointed at me, standing at the very top window at the front, looking down) I turned on the lights and went outside to take a picture of the most incredible Hochelaga Inn.

And that night? I slept like a baby knowing the ghost was safely tucked in bed. 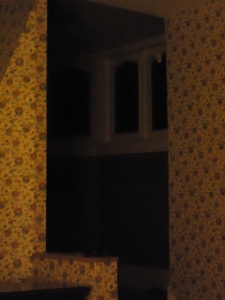 To this day the spirit of the place haunts me. My characters, whose footsteps I was privileged enough to walk in, are with me in a way they weren’t before. The sights I saw are imprinted on my vision, deep and immovable. I’m lucky to have been able to visit the wondrous settings from which I was able to tell my story.

If you’d like to visit The Hochelaga Inn, click here for their website. I highly recommend it for its ambiance, its breakfast, and for the experience of sleeping in such a beautiful old Victorian mansion.

My Gothic paranormal romance, The Magician’s Curse, which is set in Kingston and features a house that is inspired by The Hochelaga Inn, is available on Kindle, Kobo, and in paperback on Amazon, as well as on the shelf in the Novel Idea Bookstore at 156 Princess Street in Kingston.

Here are some more photos of The Hochelaga. 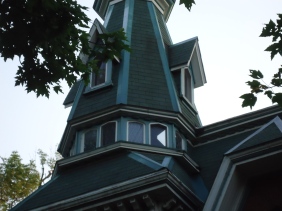 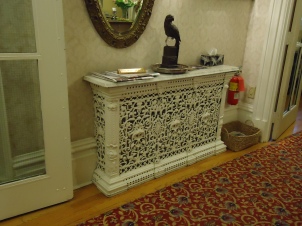 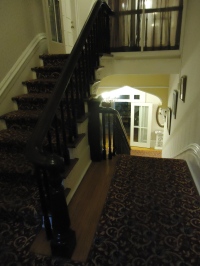 I’ve come to the conclusion that writing a series of books rather than a standalone is harder when you’re a pantser. A pantser, if you’re not familiar with the term, is a writer who writes by the seat of his or her pants, as opposed to a plotter, who plots the entire story out ahead of time. If I could just plot out where my characters are going to go after book three, I would know if their life beyond it was worth writing about. Because let’s face it, no one wants to read a book about people getting up and going to work every day, coming home, cooking dinner, watching TV and going to bed, ad nauseam. It’s bad enough that most of us do just that in real life.

Therefore, I can only guess whether my series will be a trilogy or if it will go on.

Don’t get me wrong – I love pantsing. Sometimes I’ll be happily typing along, minding my own business (because I don’t make up my stories. I just pluck them out of mid-air and transcribe them) and suddenly one of my characters will say something that completely blows me out of the water. Like, I had no idea it was coming. It’s by far the best part of writing. When you’re reading a book and you get hit by a sudden revelation, you can bet that there’s a good possibility the author was struck at the same point in the story with that same gong. What’s not to love about being hit by a gong? (I do enjoy stream of consciousness writing.)

If I was to guess right now, I’d say it’s going to be a trilogy. Yet I know I’m going to miss my characters so much that I’m not going to want to stop writing. Will they get up to more adventures? I guess they could. We all do, once in a while, right? If we didn’t, our boring day-in-day-out existences would drive us to eventually seek something more anyway.

Speaking of adventures, I’ve updated and edited an old post. It has more pictures now, as well as a few more links. I can only guess whether or not it will show up in your email if you follow me that way. I’m guessing it will, if you weren’t following me in July of 2013 when it was first posted. I urge you to read it if you haven’t already: it’s one of my best. Even if you have already read it, check out the new pictures. I’ll repost it in an hour or so. It’s entitled “A Haunted Visitation.”

This post is part of Stream of Consciousness Saturday. You can find the link to join in and read all the other posts here: https://lindaghill.com/2017/08/11/the-friday-reminder-and-prompt-for-socs-aug-1217/

While you’re here, take a good look at the badge, for it may be the last week in which it’s featured! The contest is on right now for a new SoCS badge design. We have five entries already, which means there are only five slots left open. Click the following link to read more about it, see the entries so far, and enter the contest yourself: https://lindaghill.com/2017/08/08/the-4th-annual-socs-badge-design-contest/

As an author, I am always curious about what motivates people to read. I’ve done posts before about how people choose books, about covers and colors and what you seek in a blurb, but this post poses a simpler question with perhaps an opportunity for more complex answers.

Why do you read?

Sometimes I read to learn, sometimes to go on an adventure in a far away place I will probably never get to in real life. Occasionally, I read because it is such a part of me. Whereas some people enjoy movies, music or the theatre, favourite sports or socialising with others, I like books. I love the feel of them, the scent of them, the way they make you feel like someone understands when no one else does.

Sometimes I read to improve my craft. There are so many reasons. I also love the feeling of finding a…