The motion of the ocean…

Why isn’t ocean spelled “otion”? Ah, the English language. It makes no sense.

When I was little, maybe 5? 6? years old, I asked all the adults around me (and I actually remember this) why you didn’t write a number like thirty-four out as 304. Because that’s how you say it, right? 30 4. Thirty four. None of the adults understood what I was saying. They just told me you couldn’t do it. Nope. No way.

(Adults had no imagination when I was a kid.)

There’s a house in my neighbourhood. It’s an old house, but it was sold, and the new owners painted the red brick white and snazzed it up. (I liked it better the old way, but there you go. It’s not my house.) Anyhoo, when they screwed the numbers back on the front of the house, they put up these HUGE things in sleek silver.

The number on the house?

And it pisses me off.

What happened to that innocent little kid with an imagination?

Someone who has my brilliant imagination took it to a ridiculous(!) extreme and stuck it on a building.

Just thinking about it makes me mad.

So back to motion…

(So I can stop thinking about that poor old house.)

What’s the saying? Things in motion tend to stay in motion, or something like that.

That’s my brain. Thank goodness. These days at least.

The tinnitus hasn’t stopped, not for a second. It SCREAMS at me in the morning when I wake up and every single time I think of it during the day. But when I stop thinking about it? I don’t notice it.

Running away from zombies.

And that’s where I get stuck for the night. 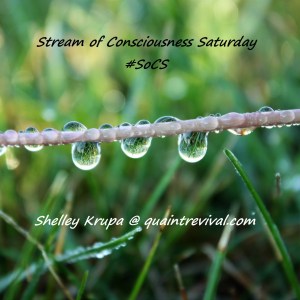 This not really serious post was brought to you by Stream of Consciousness Saturday. Find the prompt here and join in! https://lindaghill.com/2020/09/18/the-friday-reminder-and-prompt-for-socs-sept-19-2020/