I’m having a birthday birthday and a book birthday!

First, my actual birthday is Sunday the 22nd, but I’m celebrating with sushi and cake on Saturday because the sushi place is closed on Sundays. I don’t get sushi very often, so it’ll be a real treat for me. The cake is totally for the kids’ sake. Totally. *uncrosses fingers from behind my back*

Since you can’t be here to celebrate with me (but only because you wouldn’t all fit in my kitchen), I’ve decided to drop the prices on the first two books in both of my series! 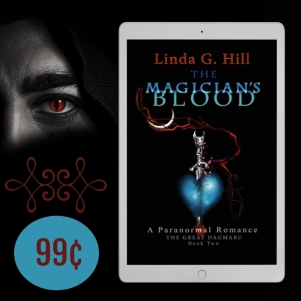 On sale ’til tomorrow.

On sale ’til tomorrow.

The Magician’s Curse: A Paranormal Romance (Book 1) is available for 99 cents until January 31st on Kindle, Kobo, Nook, and Apple.

The Magician’s Blood: A Paranormal Romance (Book 2) is available for 99 cents until January 21st on Kindle, Kobo, Nook, and Apple.

Saddled: A Romantic Comedy (Book 1), a forbidden office/male stripper romance, is available for 99 cents until January 31st on Kindle, Kobo, Nook, and Apple.

You won’t get the two Book 2s for less than 99 cents, and they may never go on sale again, so grab them while you can!

My other reason to celebrate is also half the reason I’ve been so busy lately.

I’m so excited to release this one. I loved writing it, I fell in love with the adorable characters, and I really never wanted the story to end. In fact, as I edited it, I almost doubled the word count.

For the first time on my blog, I present to you the third book in the “Once a Week at Woody’s” series, Stroked!

A stripper and a lawyer walk into a bar …

Casper thinks of Woody O’Flanagan’s Pub as home, but he has a shadier stripping job to supplement his income. One he’d quit if he could just sell his artwork. Enter Tristan, the handsome lawyer who’s itching to see Casper’s etchings…

Tristan is an up-and-comer at his law firm, but his speech impediment and sidetracked dreams are holding him back in career and love. Until he meets Casper, a gorgeous stripper who understands every word he says…

When Casper and Tristan are caught in a compromising position by the police due to Casper’s questionable job, the first thing out of Tristan’s mouth ensures their arrest. Getting thrown in jail teaches them that it’s time to follow their passions. But will their passions include each other?

Opposites attract in this hilarious and steamy m/m romance, the third standalone book in Linda G. Hill’s “Once a Week at Woody’s” series.

Author’s note: This story includes a parent with dementia.

Stroked: A Romantic Comedy (Book 3) is available for pre-order. Buy it now on Kindle or Kobo (Nook and Apple to follow) and have it delivered to your device on January 31st!

Thanks so much for celebrating with me!

As you may have noticed, I haven’t been around a lot lately here on the blog. But let me tell you, I’ve been busy.

And it’s finally paying off. So I’m celebrating with a sale!

Waaaay, back in February, I released the box set/bundle/omnibus edition of “The Great Dagmaru” series. And I even made my own covers for it! But anyway, it’s available for less than it costs to buy all three books individually. By, I think 36%, but I’m really not mathing very well these days. The box set is $6.99, but the regular price of the three books is $10.97, so you save $4. And it’s almost 1,000 pages long!

Anyhoo, yeah. And I haven’t even got to the 99-cent thing yet! Bear with me.

So the box set. There’s a buy-2-get-1-free deal on Kobo right now, and “The Great Dagmaru” is included in the sale! So if you have a Kobo account or you’re interested in getting one … and you like paranormal romance novels … check it out! 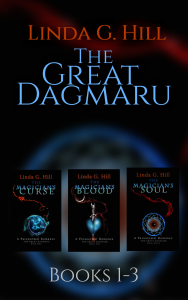 A continuous love story of a magician and his assistant, from their meeting on a train to their journey to romance in his Gothic mansion and beyond. Two families clash, each with their own supernatural curse.

Herman sets out to make a better life for herself, believing the job she has lined up will solve all her problems. But her plans are derailed when she meets a charming, mysterious stranger on a train.

The moment Stephen Dagmar sets eyes on Herman, he knows he’s found not only a new assistant to join him onstage in his magic show, but the woman of his dreams.

At home in Stephen’s Gothic mansion, Herman revels in the extravagant romance he lavishes upon her. Yet a shadow hangs over their fragile love. Is his devotion really what it seems?

Amidst lace and leather, innocence and debauchery, The Magician’s Curse begins the spellbinding tale of The Great Dagmaru and his assistant.

The Magician’s Blood
As Stephen and Herman perform on tour, darkness descends when the reality of the Dagmar’s incubus bloodline surfaces for the first time in over a generation.

The Magician’s Soul
Back at home, the happy couple plan their wedding. But members of Herman’s family have other plans … In a story of finding family, both good and evil, this thrilling and at times heartbreaking final book in the series is sure to keep you on the edge of your seat.

You can also get it on Kindle, Apple, Barnes & Noble, and Smashwords.

On the other hand, if you already have your copy of The Magician’s Curse (Book 1 of the series), you’ll want to buy the other two separately, because for the first time ever, The Magician’s Blood (Book 2) is 99 cents!

As Stephen and Herman perform on tour, darkness descends when the reality of the Dagmar’s incubus bloodline surfaces for the first time in over a generation.

On sale only through Mother’s Day (May 8th) so grab it now!

My other book that’s on sale for 99 cents is the first book in my “Once a Week at Woody’s” series, Saddled!

Going to work just got a lot more exciting.

The no-dating policy at the Studletter Condom Company isn’t a problem for Sandra until Michael walks in, all good looks and bulging biceps. But he’s a temp—surely she can hold out until his contract ends …

Eager to quit moonlighting as a cowboy stripper, Michael, aka Saddle McFleshbomb, buckles up to learn the ins and outs of his new career. Only it’s harder than he expected when he meets Sandra, a stunning beauty with a laugh that heats him to the bone.

When Sandra turns up at Woody’s Pub and catches him in the act of disrobing onstage for a room full of men, Michael sees his solution: maintain the pretense that he’s gay so they can “date” without defying the office romance policy.

But the clock is ticking on his fib. And it’s sure to bite him in the scantily clad behind.

If you like low-angst romantic comedy, hot office flirtations, and a long slow burn, you’ll love Saddled, the first book in Linda G. Hill’s “Once a Week at Woody’s” series.

Get it now for just 99 pennies on Kindle, Kobo, Apple, Barnes & Noble, or Smashwords. Sale ends May 11th, so don’t wait!

So, why am I celebrating and putting books on sale? Because I have a new book coming out!

Rocked is Book 2 in the “Once a Week at Woody’s” series, and if you preorder it now, it will be delivered to your device on May 10th! 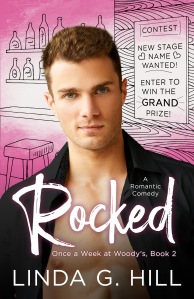 Seth was just Monica’s best friend’s older brother. Until she sees him strip…

Seth is the mayor’s son, but he’s Mr. Mystery onstage. His job as a stripper at Woody O’Flanagan’s Pub totally rocks, but he’s plagued by his sister’s fear that he’ll ruin their dad’s reputation and his career.

Monica will do anything for her best friend. So she marches down to the pub to drag Seth off the stage before he can shed a stitch. Instead, she’s thunderstruck by his moves.

As Monica and Seth trip over their hots for each other, can they outrun other people’s expectations and find true love?

A low-angst, high-stakes, steamy romcom, Rocked is the second standalone book in Linda G. Hill’s “Once a Week at Woody’s” series.

Grab your copy and see who gets the last laugh… and the last dance.

Get it on Kindle, Kobo, Apple, Barnes & Noble, or Smashwords.

I’m so excited to see what you think of my romantic writings! Thanks for reading. 😀