It’s been a rough day, both emotionally and financially. I’m having a hard time concentrating; I wonder if writing it out will help.

I was sitting down to breakfast with my best friend, John, when Winston came in from playing in the back yard, huffing like he was choking on something. He ran around a little and then he tried to lay down but every time he did, he whined like it hurt. After watching this go on for a few minutes I decided to take him to the vet. They checked him out as soon as we arrived. Since his gums were pink and he didn’t seem to be in any immediate danger, they left us waiting for about twenty minutes. By the time the vet came to see him he was filling up with air – his stomach was bloated and getting worse by the minute. They tried to vent his tummy with a nasogastric tube but nothing came out. X-rays showed that his stomach was twisted. They’d have to operate.

So we left him there and a couple of hours later they called with good news; they got the air out while he was anesthetized and thought maybe he didn’t need surgery after all. If all went well, I was to pick him up at 4:30. At 4:25 the vet called. He needed surgery after all. The gas had come back.

Almost three painstaking hours later the vet called me. He’d come out of surgery okay and the repair was done, but they still don’t know why he filled up with gas. Anyway, there are no foreign objects in there and all his inner pathways are now clear. The vet said that they’d keep him overnight but of course there’s no one there to watch him, to see if he fills up again. So the vet is going to take him home with her. Wow, right? Probably close to $2,500 worth of wow. All for a free puppy.

Oh, and I lost one of my silver rings today.

They say bad things come in threes. Hopefully losing my “f”‘s will count for the third. 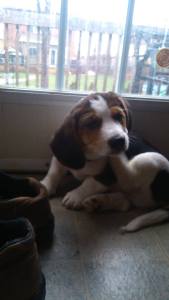 117 thoughts on “…on this difficult day”