It took Lavender two days to brew the right potion to correct Trigger’s eyesight. In that time, she’d discovered that his real name was Tehtholonli Smith, and that his mates had nicknamed him Trigger because of his proficiency with a gun. That certainly wouldn’t do.

So she began calling him Smithy. He didn’t like it. Then she tried Tehth, but he asked her why she kept spitting on him. Finally she attempted to call him Lonli, but he corrected her, pointing out that he had Grant to keep him company. All the while, Grant laughed at her, even as she rubbed a salve on his sore foot so he could walk comfortably. Ungrateful beast.

At a loss for anything to address him by other than “hey you,” she added a little something to the potion.

Finally, after two full days of picking up broken vases that had fallen from tables her visitor had stumbled into and one awkward moment when he’d changed into Lavender’s britches, thinking they were his own, she sat Tehtholoni Smith down at her kitchen table and handed him a steaming cup of potion.

“Are you quite sure it will work?” the man previously known as Trigger asked.

“I am,” Lavender replied.

So he did. He drunk it all the way down and sat with his eyes clamped shut. When Lavender asked him why he didn’t open them, he said, “Because I’m deathly afraid of disappointment.”

“But if you don’t open your eyes, you’ll never know that it worked and that you can see perfectly.”

“Perfectly? Do you really think …”

He opened his eyes, blinked a couple of times, and shouted “Eureka!”

And then he saw Lavender’s face and his jaw dropped. “You are the most beautiful woman I’ve even seen!” he cried.

“Well then,” she said with a smile, “being that you’re the best shot in the land, maybe you should take my picture, Sh—Sh—Shutter.” Yes, that will do for a name, she thought as she handed him a camera.

And lo and behold, he was and excellent photographer. He took crisp, focused, unblurry photos of Lavender, and pictures of Grant, and the trees, and the rich, lush mountainside.

And Lavender and Shutter the sharpshooter and Grant lived happily ever after in their quiet, cozy cabin.

(Judy’s prompt was “Lavender Quill, a solitary witch that is into crystals, candles, herbs and crochet (hidden spells she weaves for friends and family), is alone at the cabin after her parents both died three years ago.  She finds a man out on a trail, hurt and unconscious.  Grant is a marine sharpshooter who saw too much and wants to find solace in the quiet mountain, but someone is after him and he managed to get away after a desperate chase.  She uses her skills to patch up his wounds and he slowly comes around.  With her visions and other gifts, she assists him in getting to the truth and forms a bond with him, as he gets under her skin and awakens her soul.  Together, they get the bad guys and help each other heal on the mountain.”

This would make an awesome novel! Me being me, and keeping it a short story, I turned the idea on its head a bit. Hope you don’t mind, Judy! *waves to Judy*) 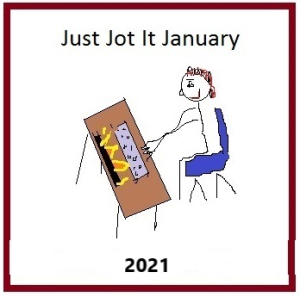 Here are the JusJoJan Rules:

1. Just Jot It January starts January 1st, but it’s never too late to join in! Here, we run on the honour system; the “jot it” part of JusJoJan means that anything you jot down, anywhere (it doesn’t have to be a post, it can even be a grocery list), counts as a “jot.” If it makes it to your blog that day, great! If it waits a week to get from a sticky note to your screen, no problem!

2. I’ll post prompts at 2am my time (GMT -5). The prompt will be the word in quotation marks in the title of my 2am post. You don’t have to follow the prompt every day, but that will be where you leave your link for others to see. You’ll get a prompt for every day except Wednesday, when the prompt is simply my One-Liner Wednesday and on Saturday, when your prompt will be the Friday Reminder and Prompt for #SoCS, which will appear at about 9:30am Friday. Each prompt post will include the rules.

3. Please ping back or link to the daily prompt. To ping back, just copy the URL from the daily prompt post, and paste it anywhere in your post. Check to make sure your link shows up where you want it to, and go back occasionally to see other bloggers’ entries – the more you visit others, the more they’ll visit you! Note: A) The newest pingbacks will be at the top of the comments section. B) Ping backs only work if you’re blogging on WordPress. Everyone else must paste a link manually.

5. Write anything! Any length will do! It can even be a photo or a drawing – you’re going to title it, right? There’s your jot!

6. If your post is NSFW, do not ping back. Please leave your link in the comments with a warning.

7. If you’d like to, use the JusJoJan badge so that others can find your post more easily.

The Magician’s Blood is 70% off