I guest-posted over at Harsh Reality. Please come over and have a read! 😀 Thanks!

Thanks so much to Sally Cronin for giving my novelette a shout-out! Please check out her post! 😀
Note: Comments here are closed. 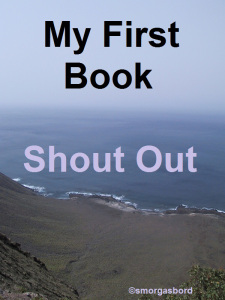 Today a novellette with humour and romance…congratulations to Linda G. Hill who is celebrating the release of her first book, All Good Stories. 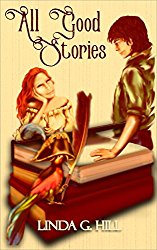 As best friends, Xavier and Jupiter have always been supportive of each others’ romantic relationships. But when Jupiter meets Bob online, Xavier can’t help but feel he needs to come to her rescue. There’s just something about Bob.

In the process of preventing Bob from wooing Jupiter away, Xavier realizes he’s been in love with her all along. Can he keep her safe and win her heart? And will he ever get to read her manuscript?Join Xavier, Jupiter, and a quirky cast of characters in this fun romantic comedy novelette with a twist you won’t see coming.

Some of the early reviews

Well, that was different…By Kaine Andrews on August 26, 2016

I came into this book not quite knowing what to expect…

I want to express my deepest gratitude to all who have bought and shared my novelette, All Good Stories. I’m truly grateful for this WordPress community, and I’m humbled by the outpouring of love and caring I’ve found here, from friends and strangers alike. Since I posted my plea for help, I’ve sold 79 copies and gone from #1,600,000 on the Kindle Paid Best Seller List to #14,376, which is awesome. More importantly than that, I’ve doubled the number of reviews on Amazon.com to six. Only 19 to go to reach that magic number where Amazon begins to promote my book!

I’m still hoping to reach $100 in royalties, which means 350 sales; Amazon only pays me 35 cents on a 99 cent book. It seems an insurmountable goal, but maybe it’s not. If you haven’t shared  this post yet, please do so. Any social media will do. And if you have read the book, please take the time to write a review. Just five minutes of your time is invaluable to me. It only needs to be a sentence.

You can find my original post here: https://lindaghill.com/2016/10/25/im-out/ and here are the links for the book, as well as my Goodreads page:

Thank you so very much. 🙂

I’m out. Of money, that is. It’s official. I went to the grocery store today to pick up some essentials and I got the dreaded “Insufficient Funds” screen on the debit machine. Though it’s killing me to do so, I’d like to ask a favour.

If you haven’t already, please buy my book. If you have, or if you have a friend who might like it, please direct them to it. Reblog, share on social media, have a parade down the main street of your town or city, whatever it is you normally do to get attention. If I can get to $100 in royalties, Amazon will pay me next month – they hold smaller amounts.

If you know me, you know I never ask for anything. I hate asking for anything. Please, just share this post. And if you have 99¢ and want to read a really funny book, please click on one of the links below.

Thank you so much, Kaine! Very happy you enjoyed it. 😀

Well, that was different?

I came into this book not quite knowing what to expect. I knew it would involve ?mushy stuff,? and that it was liable to be more lighthearted than my usual fare, but beyond that I didn?t have much to go on.

Let me say that I am glad I took the trip. Sometimes whim and chance lead us to things that we would not otherwise have come across, and in those moments we should be thankful.

The technical portion of the program is well done, and while in the first few chapters you might be prone to thinking it childish or a little over-the-top, it becomes clearer towards the end and you start to see how it all fits together. The final whammy – and the opportunity to read the central story that…

My novelette, All Good Stories is on sale today! It’s a romantic comedy, complete with pirates, a parrot, and a Viking. What could possibly go wrong? Lighthearted and fun, it’s perfect to enjoy over a lunchtime or two. It’s available for the low cost of 99¢, or the equivalent in whichever country you live, on both Amazon for Kindle here: https://www.amazon.com/dp/B01JQWMQAE

The Kobo site has a preview of the book. I plan to figure out how to set one up on Amazon soon. In the meantime, here are the first two chapters:

Jupiter bounded into my book store with an extraordinary spring in her step.

“I finished it!” she proclaimed, beaming much like the ray of sunshine that fell upon the counter every fair morning at this time of year.

“Finished what?” I asked. As if I didn’t know. She’d spent months bemoaning the grueling process of editing her novel.

“Stop it, Xav.” Jupiter had a peculiar way of shortening my name when she was annoyed at me. Her eyes narrowed and her lip lifted crookedly at the ‘V’ as she elongated it. She was very cute when she did it, which made me want to annoy her all the more.

I wished, not for the first time, as she bounced up and down in her spring jacket that we were more than just friends.

“Does that mean you’re finally going to share it with me?” Leaning forward on the counter, I rested my chin in my hand to affect nonchalance. Deep down, I was as excited as she was.

“Of course I’ll let you read it.” She dug through the suitcase she called a purse. After a moment, she pulled out a bound stack of papers. “Aarin, The Topless Pirate,” she announced as she plopped it down in front of me.

“Sounds promising.” I glanced at the title page, which stated only the title, then back to my best friend. “What’s it about?”

“And is the pirate topless?” I sat up straight. Visions volleyed around in my mind of breasts bared to the slightly chilled ocean breeze.

She smiled wickedly. “You’ll have to read it to find out.”

I picked up the manuscript and slid it onto the shelf behind the counter. “I’ll read it later.”

She stared, wide-eyed. “You’re not serious.”

“It doesn’t sound that interesting. It can wait.”

“But…” She didn’t look as though she was going to cry, exactly, but the distress on her face was enough to make me waver.

“Make me want to read it. Tell me what it’s about.”

“It’s about a pirate. A topless pirate. Who goes to sea.”

“And what? Isn’t that enough?”

“Is there sex? Is there a sunburn involved?”

“Fine! Don’t read it then.” She turned sharply and stalked out of the store.

Feeling bad about my little April Fool’s Day joke, I watched until she disappeared around the corner before I pulled the manuscript back out. I turned back the title page fully expecting to be properly titillated, only to find a photocopied picture of a crusty old pirate with his back facing the camera. He wore nothing but a three-cornered hat.

That we share the same sense of humor makes it no wonder Jupiter and I have been best friends since elementary school.

Bob was a novelist. He was also a blogger. To round out the combo, to make it a trio (because Bob adored the number three), he referred to himself as a Serial Alliterator, which meant he loved alliterations. His blog profile sported a selfie of a previously pencil-thin Bob in the bathroom mirror, wearing nothing but a wicked grin. Though he stated in his profile that he loved the outdoors, since his foray into blogging he had seldom seen the sun. Secretly, he called himself Blob the Blogger.

Today, Bob is excited because yesterday he met Jupiter online. They met on Bob’s blog after Bob blogged about writing a novel. He and Jupiter spent three hours commenting back and forth. Jupiter was single, and she was writing a novel as well.

Tomorrow, if he wasn’t too tired from using the treadmill, Bob planned to write Jupiter three poems. His poems would employ many uses of alliteration; they would contain the letter ‘J’ as often as Bob could manage. They would not contain the first letter of Jupiter’s best friend’s name. As far as Bob was concerned, he needed no excuse to leave the letter ‘X’ out of Jupiter’s joyous poetry. No justification at all.

So there you have it! If you’d like to read more, please go to Kobo: https://store.kobobooks.com/en-ca/ebook/all-good-stories

and support a brand new professional author! 😀
Thank you for reading!

And now I’m at a loss for words.

It’s been an interesting time to get to this point, and someday I’ll write about it. For now, I’d like to introduce you to my amazing cover, designed by the even more amazing and lovely Belinda Borradaile, to whom I’d like to express my profound thanks. You can find Belinda’s stunning artwork and her amazing writing at https://idiotwriting.wordpress.com/

All Good Stories is a romance novelette that was begun as a project for the A-Z April Challenge in 2014. It was originally written entirely off the cuff and posted on my fiction blog unedited.

As best friends, Xavier and Jupiter have always been supportive of each others’ romantic relationships. But when Jupiter meets Bob online, Xavier can’t help but feel he needs to come to her rescue. There’s just something about Bob. In the process of preventing Bob from wooing Jupiter away, Xavier realizes he’s been in love with her all along. Can he keep her safe and win her heart? And will he ever get to read her manuscript?

Join Xavier, Jupiter, and a quirky cast of characters in this fun romantic comedy novelette with a twist you won’t see coming.

A few kind comments from my beta readers. With sincere appreciation:

“You got a couple of laughs out of me, and seriously, I do not laugh when I’m reading.” ~ Maggie Wilson, Writer/Blogger

“A fun, easy read. It had me chuckling many times.” ~ Jeanne Owens, author of Kismet and Tell, and Chronicles of Riss.

Since All Good Stories is less than 50 pages in length, I’ve decided not to print a physical copy. The release date is Wednesday, August 10, 2016. You can pre-order your eBook for just 99¢ at Amazon worldwide for automatic delivery to your device on that day. Please find it here:

All Good Stories will be available on Kobo by its release date!

Please feel free to share this post on your blog and all over social media! Thank you! And happy reading!